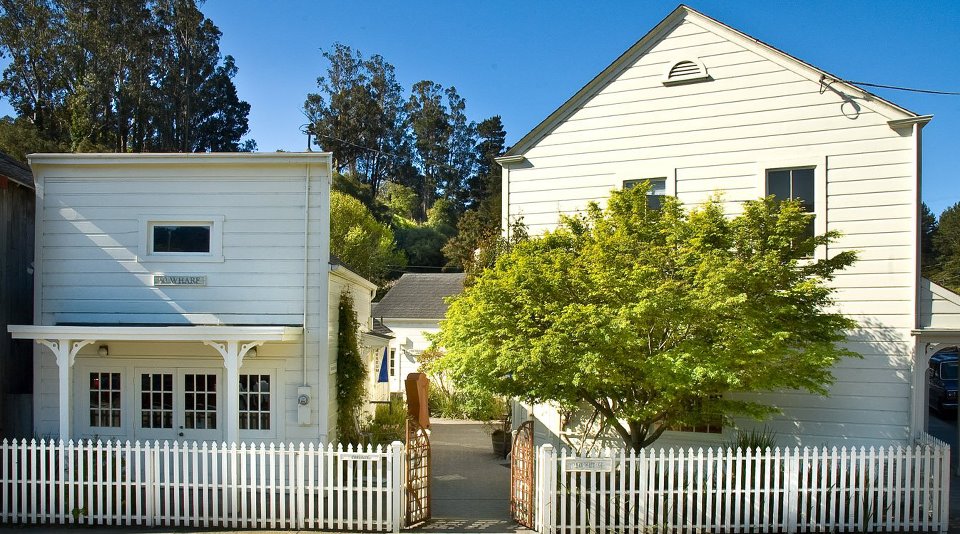 HISTORY OF THE BOLINAS MUSEUM

The Bolinas Museum began as the Bolinas Memorial Museum in 1983 and initially was was dedicated to preserving the history of the town. Though housed in a small structure, the founders presented quality exhibitions of history and historic art. A thrift store helped to support the museum. Several years later, the museum added art to its mission, focusing on contemporary Coastal Marin artists.

In 1989, the name was changed to the Bolinas Museum when it was moved to a large space in a newly restored historic building in downtown where the gallery was designed to accommodate both art and history exhibitions. In 1998 the historic compound of buildings came up for sale and a well run capital campaign with generous support of many people allowed the Museum to buy the buildings and expand into five galleries, it’s own suite of offices, and rental space for other local businesses.

From the beginning, the Bolinas Museum has been nurtured by generous supporters and  volunteers who contribute their time, money and diverse skills to make this Museum such a success. Families and individuals donate historic material to be preserved for posterity and invited artists have contributed exceptional works.  Donations, whether as major donors, single memberships or a dollar in the donation box, are important to us. It is because of volunteers, dedicated staff and public support that the museum is able to continue to offer excellent exhibitions and programs and to continue to have free admission to the galleries and our public events.

Inspired by the elders of Bolinas and the need to preserve the history of the town, in 1983 David Van Dusen establlished the Bolinas Memorial Museum.  Townspeople contributed the historically significant objects, photographs, documents and memorabilia that are the core of today’s history collection. Craig Ayliffe as curator, documented and organized the collection.  The founding Board of Directors included David Van Dusen, Karen Gray, Craig Ayliffe, George (Sandy) Magid, Steve Henneman, Benjamin G. Dann III, and Steven K. Lander. The Museum opened in a space just 12 x 24 feet. Van Duesen bought a  former Quonset hut and with the aid of  skilled volunteers remodeled it and added a historic looking facade.

Though the newly incorporated museum was housed in a tiny building, Craig and volunteers mounted sophisticated exhibitions of both historical objects and 19th century art. Craig did research, organized events and gave educational talks.

The first Board of Directors was joined by Joan Bertsch who became treasurer and served at the heart of the Museum until 2005. Margi De Greeve, a leader in developing the museum, contributed many treasures from her family whose Bolinas history stretches back to the 1860s. She and Peggy Duncan established a popular thrift store to that helped support the museum until 1995.

When David Van Dusen and Craig Ayliffe each moved away from Bolinas for other pursuits, they left behind a thriving museum, a gift to the community.  Board member Margi De Greeve and President of the Board Sandy Madgid guided the museum into its next phase.

In 1987, as President of the Board and Director, Bolinas sculptor Joyce Clementsbrought contemporary art to the Museum. Recognizing the wealth of accomplished local artists, she created the Living Artist Project and invited Linda Samuels to be its co-chair and then Curator.  With the help of many volunteers the Museum presented many exhibitions of both history and local artists.

In 1988, Ewan Macdonald had just restored the complex of historic buildings that now house the Museum. Ewan offered the little museum a new gallery space in the main building. Making the move was a huge leap in expense and commitment for an organization run entirely by volunteers. Joyce Clements, Linda Samuels and Joan Bertsch led the fund raising and establishment of an organizational foundation to make the move and expand the professionalism of the Museum.  In October of 1989 the Bolinas Museum’s grand opening  at 48 Wharf Road  revealed a handsome one-room gallery divided  by a floating wall with space for both history and art exhibitions.  The Museum’s Thrift and Gift store moved into the adjacent building. To organize the  history collection, Sara Pusey, Superintendent of Bolinas- Stinson School, stepped in as Registrar and also served as President of the Board. After years of volunteer service Linda Samuels became the first paid staff person of the Museum as the Director / Curator. Samuels  created exhibitions that ranged from fine art to environmental and historic issues and established the Museum most important annual fundraising events:the Bolinas Museum Annual Art Auction and the annual holiday Mini Show. In 1994 Linda left the museum to pursue other career interests. Joyce Clements also left the Board to focus on her work as a professional artist. Together they had had created a solid platform for the organization and expanded the vision of what was possible.

After an interim, Dolores Richards became the Executive Director and proved to be a visionary, developing the Museum as we know it today. In 1997,  Ewan Macdonald offered to sell the building complex and Dolores led a capital campaign that had legendary success. Many people gave significant donations to ensure that this goal came to fruition and the Museum now has its own home and footprint in downtown Bolinas. Before Dolores retired, she oversaw the final payment on the mortgage.  Dolores expanded the museum from one room into five gallery spaces–several supported by individual donations– galleries dedicated to the main exhibition, photography, Coastal Marin Artists, Permanent Collection and the history room where history buff Phil Frank created exhibits for over a decade. Dolores also developed the Museum’s Permanent Collection of locally relevant fine art and photography. Several Board members were invaluable in this period of development: Sue Wright, Timothy Maxon, Jim and Beth Wintersteen, Ralph Camiccia and Sally Robertson. In June of 2006, after 12 years, Dolores retired as Executive Director. She had guided the evolution of a small-town museum supported by a thrift store, to its current polished standard of professionalism and reputation for excellence.

In 2006, Lucy Van Sands Seeburg (Vandy) became Executive Director.  A long time Bolinas resident, she brought a background in the arts, and dedication to continued excellence and development of the organization. One of Vandy’s first actions was to renovate the Museum’s history room with funds donated in the memory of Amy Jordan, who spent most of her ninety-plus summers in Bolinas. The crowded opening celebration for the new light-filled history exhibition space included many descendents of early Bolinas families who came from far and wide.  Vandy enlivened the use of the courtyard    with many yearly series of  courtyard concerts, art talks  and dynamic events such as the colorful Dia De Las Madres Mother’s Day party.  She also created an outreach program to Hispanic families. The last Annual Art Auction that she organized in 2012, brought in the highest profit of its 20 year history.  Vandy retired at the end of September, 2012.

Artist Dieter Tremp served as Curator of Exhibitions from 2006-2012.

In October of 2012, Jennifer Gately stepped in as the Executive Director.  With experience in working with large arts organizations, she brings fresh energy and new ideas to the Museum.

Curator of Coastal Marin Art & History  Elia Haworth, who joined the staff in 1999, serves many facets of the organization including creating history room exhibits, curating exhibitions of local artists, and managing the museum on weekends.  Chris Borg is the Office Manager & Development Associate and Nicole Frazer is the Registrar & Exhibition Coordinator.  The small staff, Board members and volunteers and supporters work together to bring diverse high quality exhibitions and events to the community and visitors.

Volunteers serve as Board Members, docents, event volunteers, researchers, historians, guest curators, organizers, project workers, exhibitors, and much more.   All contribute to this thriving museum and membership continues to grow.